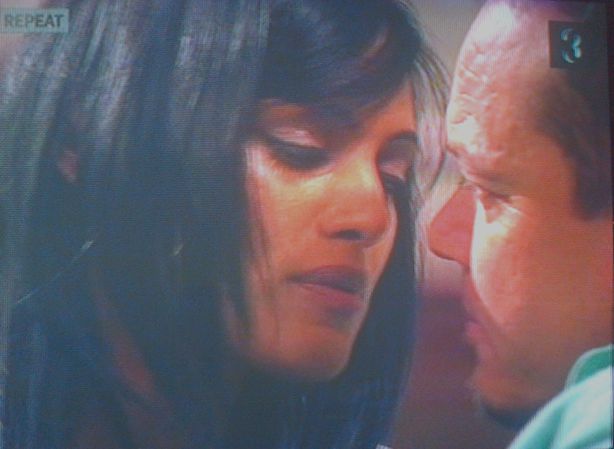 To be honest, I was ready for the Isidingo writers to kill off both of the Xavier men or at least send them on their way to an assigment outside Horizon Deep.

They were both so boring with their partners – the Sibeko ladies – that I wondered if there was any story left to be told with them.

But then things changed…

For the first time in a long time there are people for me to root for on Isidingo.

Out of no where Calvin and Charlie started flirting and suddenly I welcomed seeing two of my least favourite characters on the screen.

Charlie and Calvin suit each other. They are both physically and intellectually on the same level and they just happen to be good friends as well.  This version of Charlie is a lot more suitable for Calvin than the previous one.  And these two are better suited than Brad and Charlie.  Brad had 100 times more chemistry with Pelisa than with Charlie.

The Isidingo writers are (sort of) keeping it realistic in that they both recognise the attraction (although it’s debatable whether Calvin reluctantly spurning Charlie’s advances is realistic), but in true soapie fastion, Calvin doesn’t want to ruin their friendship.

No doubt the Isidingo writers can milk this relationship for a while. I look forward to see how it develops.

These two are a couple I used to like. I’m not sure why the Isidingo writers kept them apart for so long because Priya is the only woman on Isidingo that Frank had chemistry with. And maybe that doctor.

I absolutely hated Frank when he was with Nikiwe. They totally drag each other down. In fact Nikiwe would do a lot better with Shkumbuzo or Benjamin – someone more her own age and more interesting than Frank. Nikiwe is beautiful, but boring.

She needs someone to perk her up, not someone like Frank who is an alcoholic, self-important bore. Everything is about him, even his recent marriage proposal he made to her.

Priya can deal with Frank’s ego a lot better than Nikiwe can. She’s emotionally strong and knows herself.

But Frank has committment issues and Priya can’t afford to put their daughter through more drama.

This might just get interesting. Just leave Frank and Nikiwe apart, Isidingo writers. Put him with Priya or let him go on an adventure off-screen.

OMW! These two are absolutely perfect for each other, especially their love and supposed hating of each other.

All along you knew Lincoln had a major crush on Katlego, despite his constant shouting  and carrying on with her before they made peace with a ‘business parternship’ wedding. Plus they cheated with each other way back (before we knew any of them on screen).

Seeing Katlego all jealous of Lincoln’s ‘friend’ is sweet – almost as sweet as Lincoln banning Kat from continuing to see Calvin. Okay, maybe sweet isn’t the right word to describe either Lincoln or Katlego.

May these two love and torment each other for a long time to come.