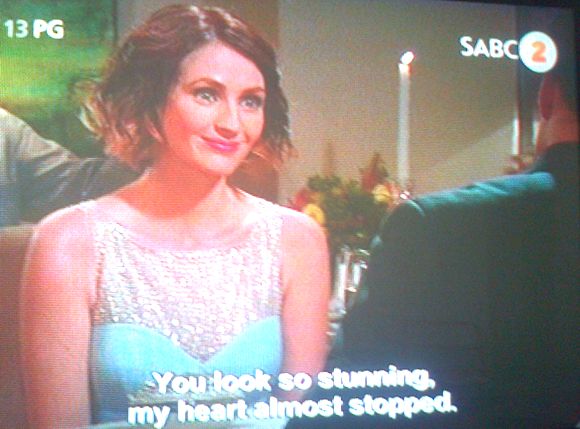 On Tuesday night’s episode of 7de laan Felicity suggested to Paula that she had two choices.  To either take him back and forgive him or for Paula and Altus to divorce.  And that really has become the crux of the matter.

Paula had been showing more spite than hurt since the day after she found out about the devastation that Altus brought on their marriage.

She went into typical Paula mode and hit back at Altus by spending his money left right and and centre and by trying to make him jealous by dating other men.  And it worked to a point.

But it wasn’t making Paula look pretty nor classy.  In fact it made her look mean and childish.  Not what you would have expected from someone who is as sophisticated and well-travelled as Paula van de Lecq.

She wanted Altus’ attention and when she got it, she pushed him away.  Understandable as it was -because who would know what to do if the love of your life, the one person you thought would hurt you, did just that?

But why then use Altus and the Bruynwaves team to do her work for her with the Miss Madeleine campaign and then take all the credit without mentioning them?

The way Paula was carrying on actually made us feel sorry for Altus.  At least he regretted the affair with Kristin and was trying  everything to make things right.

But then the tables turned.

As soon as Altus bought a R5000 dress for Paula he sank low.  Very low.  His method of getting his wife back was to manipulate her with rare flowers, expensive gifts and rosy words???  Surprisingly Paula took the flowers and the dress and she actually wore it on a date with Altus to an expensive restaurant!

The more Altus spoke about his proposal and wedding vows, the sleezier he looked. For goodness sake! He threw those wedding vows away when he very purposely fell for Kristin. Like Paula actually meant a lot less to him than we (and Paula) were lead to believe.  He was just saying things and looking like he could say those same words to another woman.  (I must mention here that it could just be the actor Heino Schmitt who isn’t portraying the genuineness of Altus words.)

When Paula told Altus that their marriage was over because she would never trust him again, it was very believable.  He sat there across Paula at the dinner table looking like a used-car salesman.  He told her nothing about how they could get to the other side of the affair.

For the first time since the day after Paula found out about the affair, she was believable as a woman left brokenhearted by the cheating love of her life.

Are Paula and Altus to divorce? Who know – this is 7de laan after all.

Should they divorce? It depends on how they react from here on in.  If they’ve both grown past making each other jealous and wanting/buying expensive gifts in a year or so then maybe.

It would have been a nice touch if Paula or Altus had mentioned their baby instead of that stupid plot where Brandt stayed in Paula’s room before the wedding.

Who cares how pretty Paula looks or how jealous or sorry Altus acts.  It’s time these two grow up and act like two adults and if that leads to a Paula and Altus to divorce, then so be it.

Paula and Altus’ divorce will be finalised