According to Tvplus Paula and Altus’ divorce will be finalised on 7de laan later this month! 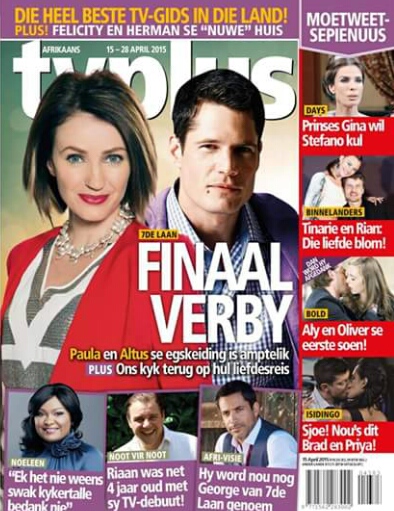 I’m surprised that 7de laan went that route. The idea of Paula and Altus worked up until after their baby died though.

To be honest, we hardly saw Paula and Altus together as a married couple after Paula pitched up in 7de laan again after visiting her parents to recover from their baby’s death.

The 7de laan writers want to forever write them as pining for each other instead of a happily married couple dealing with things married people deal with – working too hard, he maybe wanting a baby, she afraid of losing another one. Or pregnancy, raising a young family. Paula’s biological clock is ticking and we don’t get the idea she or Altus is concerned about it.

They refuse to write Paula as a nearly middle-aged woman – they want her to act a whole decade younger than she is.

Plus there’s no way Paula will forgive and forget the affair. Even though she has absolutely no reason to not believe Altus when he says he’s sorry and it won’t happen again.

He was always the one who stood strong when she was all over the show chasing the next love of her life. Now she refuses to be the one to fight for their relationship.

While Paula running around as a single woman fills me with dread…seeing we’ve seen that done to death for more than a decade, it will be interesting to see where to from here for Paula and Altus separately. Somehow I foresee them throwing longing looks each other’s way at every turn. Let’s hope not!

Because there’s always the remote control when 7de laan and Paula becomes too much to take.