With load shedding happening at 6.30pm around here for most of this last week, watching 7de laan was a very disjointed affair.

I did though see the week’s episodes and this is what went down.

Paula and Altus
Paula had to attend court to finalise her and Altus’ divorce just when Altus arrived back in town. 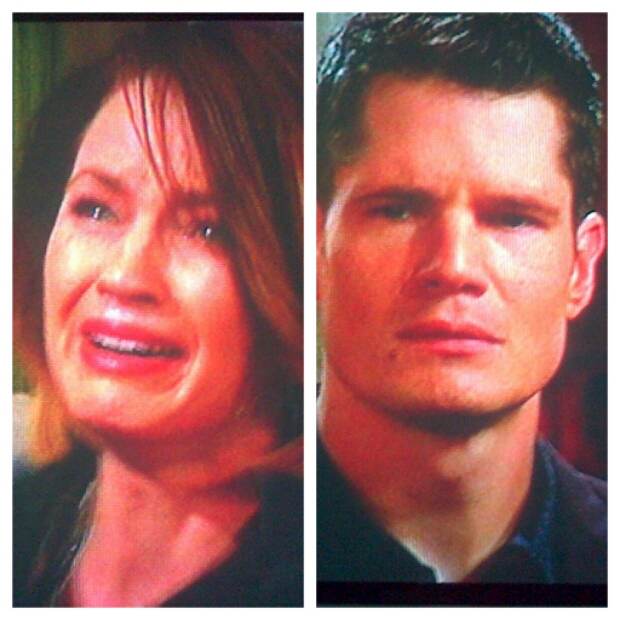 Both looked devastated by the end of their marriage, and I felt bad for them when they looked like they would cry when Paula told Altus the divorce was finalised. However they made the choice. No one forced them to divorce.

So hopefully the self pity and self righteousness ends with the divorce decree.

Oh and Xander is helping Paula get Brenda P to stop the harassment online. Most bloggers would just delete the comment and block the troll. But Paula of course likes drama surrounding her.

Xander obviously doesn’t have enough work to do.

Herman, Felicity and Nadia
Nadia is back to being rebellious, fighting with her over protective father. And now we have to see Herman losing his cool every time he’s on our screens!

Nadia stayed over at Sonja’s flat without telling anyone and her phone was off. All of a sudden she’s become cheeky, sometimes rude to people other than her dad. She even had the nerve to come in late because she overslept, then stood around chatting because Charmaine wasn’t in yet. All in her first week at her new job.

The Croucamp family moved into the old Terblanche house and even had their housewarming. I wonder whether Ryno even reached Boggomsbaai yet. 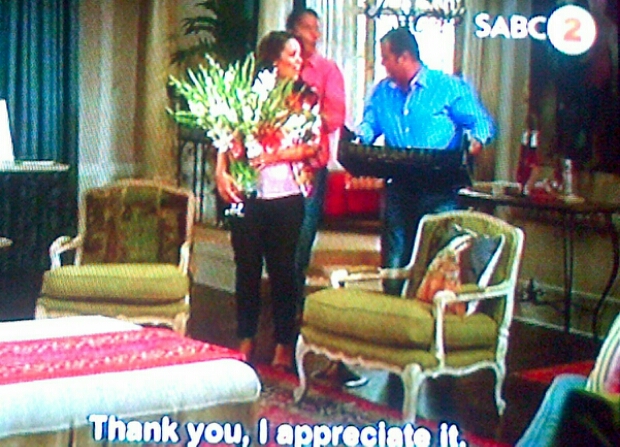 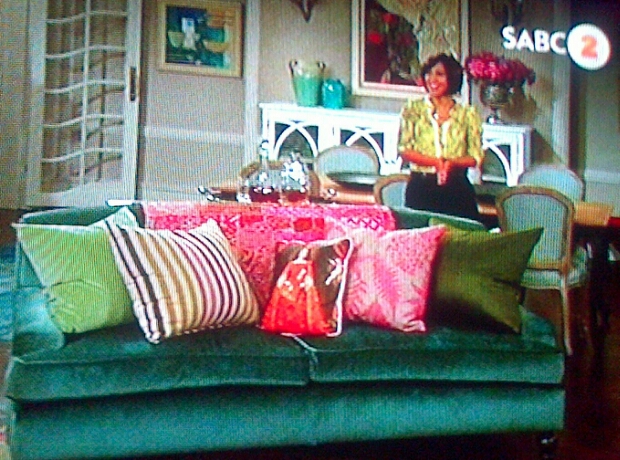 The living room/dining room reminds me of the new Eclectic E decor. It looks a lot better on my screen than in the pictures. Although it also looks overly decorated. Not to my taste at all – but I won’t be living there so whatever…

Bernard and Petro
Petro got mugged and Bernard was there to comfort her and help her lay a charge at the police station. Then the next night drove her home. 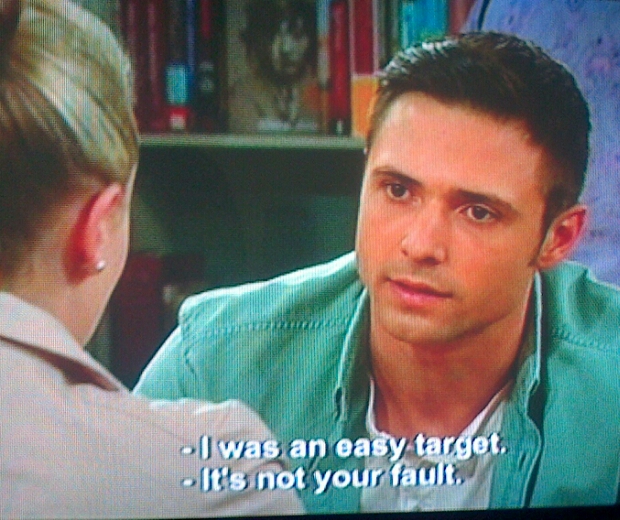 Next he volunteered to pick her up the following night for the party at the Croukamp mansion in Westcliff. 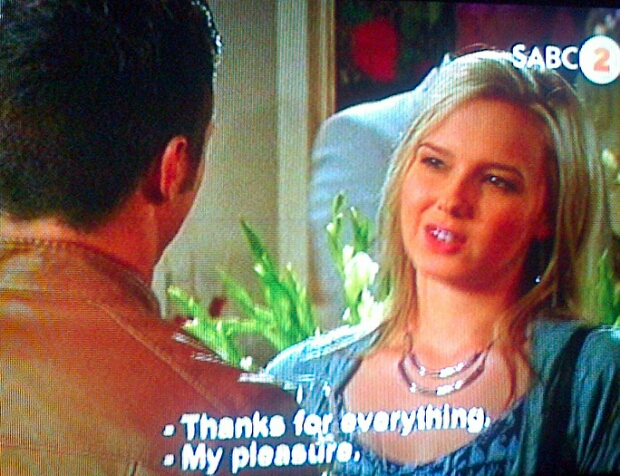 They had the wicked stepsisters Kim and Pulane gossiping. 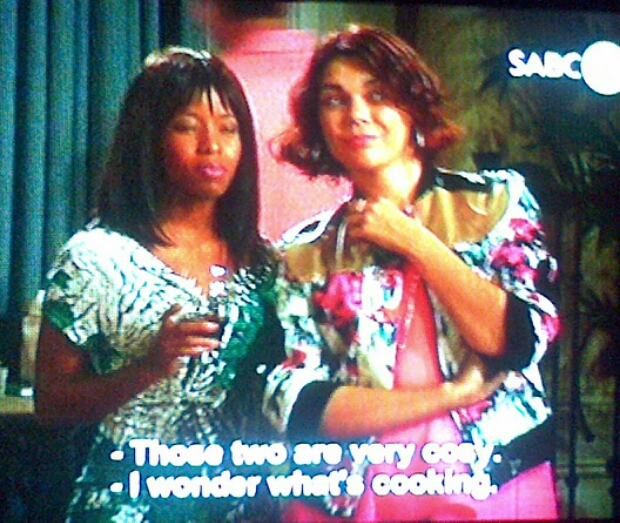 Charmaine earlier in the week asked Bernard if he was dealing with Danelle’s death. Not that we viewers saw.

He said he was fine.

Ty
Ty was keeping himself busy in Gita’s absence, arranging tours for rich business men to the Northern Cape in a vintage airplane. Then putting them up overnight in five star B&Bs. At R60 000 per person.

And business is booming! So much so that Ty is eyeing a R5million+ luxury car. Gleefully walking around the travel agency.

Knowing 7de laan as well as we do, Ty’s fall will come quick and hard.

Dali and Ntabi
Dali got a gig doing market research at the Hillside Times. At first Ntabi was upset that Neville considered hiring him without discussing it with her. In some ways you can understand her anger. Hiring her boyfriend without prior warning or to check if she would be okay with it would be the wrong thing to do seeing she’s in a position of power. She could be accused of favouritism or nepotism.

Dali brought his sexist behaviour right to the office, asking Ntabi to make him coffee.

In turn Ntabi shut him down when he suggested door to door testing. Seriously! Who would open their door or let someone into their house to ask them stupid questions in this day and age?

Dali is such an all round idiot though.

Willem
The much talked about Willem (played by Markus Haywood) made a dramatic appearance at the Croukamp housewarming party. He fell to the ground with a knife wound.

But by the next day he was up and home from an overnight stay at the clinic –  looking just a bit beaten up. 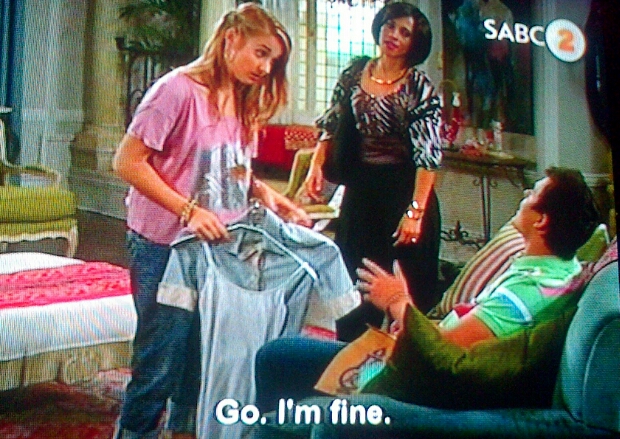 Seemingly non the worse for his apparent ordeal, Willem arrived at Oppiekoffie. He did look like there was much, much more to the circumstances of his alleged mugging. 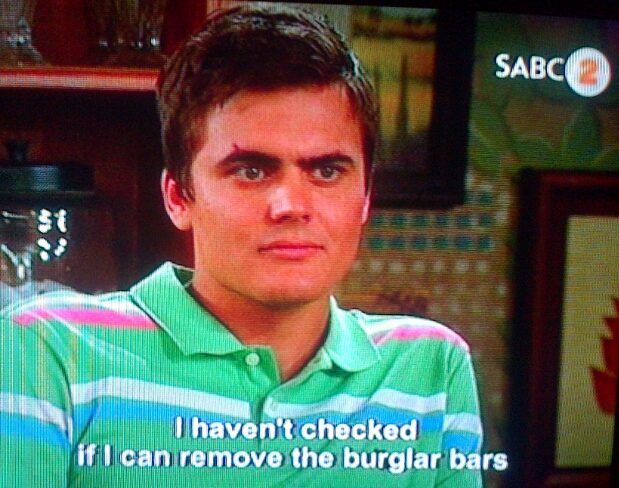 Nadia’s brother looks like a hand full. But 7de laan can do with someone who brings some life amongst the women in Hillside.

I just fear Herman’s rantings and ravings seeing how Nadia is carrying on and now a wayward stepson.

My first impression of Willem…I don’t particularly find him attractive. But neither did I think Bernard was, until he got a haircut and started dating Danelle. It will all be about the character’s personality anyway. Attractiveness is more about being kind and considerate. If the writers make Willem a bad guy only, he will be ugly, regardless of his looks. I hope they make him a good guy over time…with an edge though.

My hope is that since the people at 7de laan don’t like change much and replaced Emma with an Emma look-alike, they bring in someone similar to Ryno. A middle-aged guy who is good natured and handsome. That would do it for me 😉

PS. I thought Felicity and Paula’s outfits were gorgeous this week. And Aggie’s natural hair too. Now for Felicity’s beautiful natural hair!