Last week Gadaffi held a comatose Tau hostage with the intention of maiming him.  He even had a doctor there to sever Tau’s spine so he could be paralysed too.

But then he had a change of heart.  He decided it would be better let Tau suffer through seeing his family hurt. So he released Tau and played the ever so helpful, caring brother.

When Tau mentioned sending him to Argentina for treatment, Gadaffi showed him and Tshidi that he was making progress and could stand on his own. 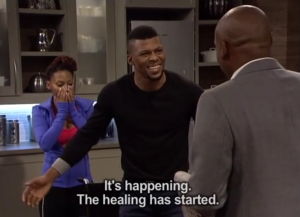 Meanwhile he was plotting with a very reluctant Cosmo to kidnap Karabo.

And they did! A whole group of armed thugs invaded the Mogale/Moroka residence and kidnapped Karabo. Telling Tau not to involve the police or Karabo would die. 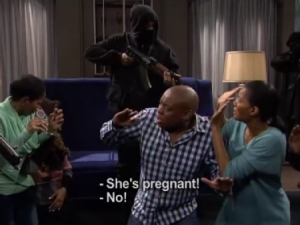 But for one so reluctant at the beginning, Cosmo seemed to relish his role as captor. 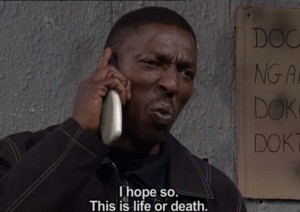 While Gadaffi sat there with a smirk on his face while Tau fought to get his wife back. 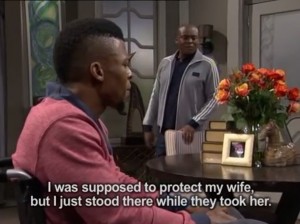 Arghhhh I can’t even stand watching this violence.  Gadaffi is also no longer all that sexy to me since he’s started acting like a wimpy baby one minute and a spoilt two year old the next minute. A very bratty, violent two year old! 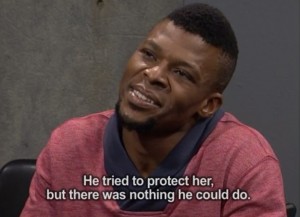 I can’t even stand to look at him or that cruel wife of his. I hope they get what’s coming to both of them and very soon.

Speaking of of which…Tshidi spent the week goading Nolwazi. She laughed when Nolwazi told her she was going to the CCMA for wrongful dismissal.  Tshidi promised to keep the CCMA case going for four years and in the meantime ruin Nolwazi’s reputation. 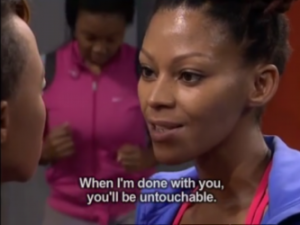 Nolwazi then asked Getty to lend her her work laptop – to send CVs with.  Instead Nolwazi logged onto the #hastag World server and downloaded confidential client files. 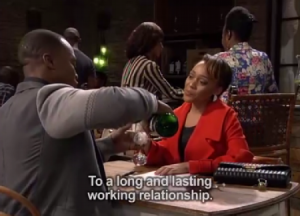 This she handed to Mawzi at Ezweni. She seems to be enjoying her new job very much. 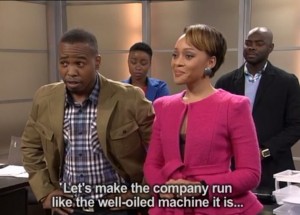 Getty met a girl through the Mandela Day 67 minutes of charity work.The teenager was upset with the people who pitch up for one day and then leave.  She seemed to have attached herself to Getty. With a plan to get stuff from Getty.  It does seem that Lesedi isn’t all that into the plan now that she knows Getty though. 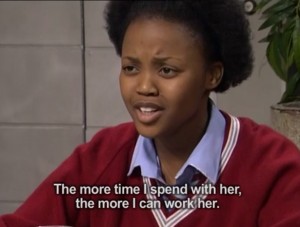 This will make that no one will want to help out on these special charity drives days for fear that the children will want to go home with you!

Smanga relunctantly went to sexual harrasment class – part of his punishment for photographing Namhla half naked.  There he met someone called Sarah who seems just as obnoxious as Smanga.

Namhla decided to return to her modeling gig. 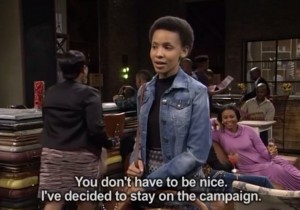 And Tau decided to put Mawzi in charge while he and Karabo are unable to be there. Much to Smanga’s disgust. 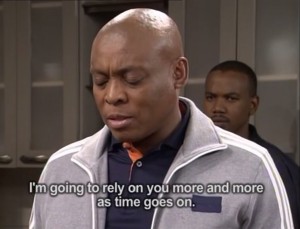