Last week was an emotional week for a few of the characters on Isidingo when Dr Beth told Calvin that the ICU needed Frank’s bed in the hospital.  He either had to switch off the ventilating machine or move him upstairs to a care facility – as Frank was brain dead.

Calvin was at first still hoping for a miracle, helped by the fact that Nikiwe wasn’t prepared to let Frank go either. Calvin asked Barker to fund the care facility. Barker agreed, although he also encouraged Calvin to let his father die in peace.

But Nikiwe, then Calvin realised that Frank would’ve wanted to his organs to be donated rather than to be kept artificially alive indefinitely. 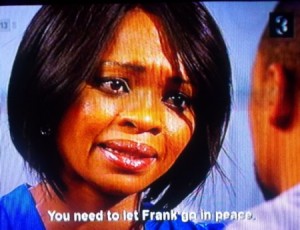 A few of the characters, including Rajesh, Nikiwe and Eddie gathered around Frank’s bed to say their final goodbyes. 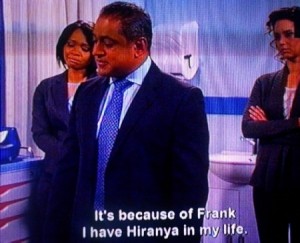 Frank’s organs were donated to a young husband and father with two children.

Calvin said a few final words to his dad, telling him that he wanted to be able to one day fill his  jacket and make him proud.

Especially Calvin and Nikiwe were so good throughout the week – especially in the more quiet scenes.  I do admire that Isidingo went for the dignified, heartfelt mourning by Frank’s family and friends at his bedside, rather than the more dramatic screeching and wailing one that could have been. 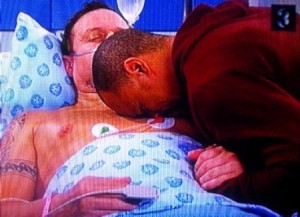 So it’s goodbye to Frank Xavier. Apparently Kevin Smith will be working behind the scenes at Isidingo. 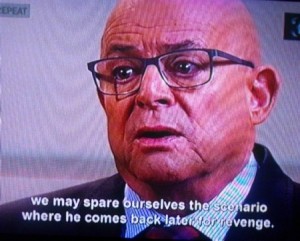 I think we are to assume that Barker Haines and Lincoln Sibeko are the ones responsible for Frank’s death.  They talk in such riddles sometimes that I have no idea what they’re talking about.

Nina Zamdela told Sizwe that pastor Gabriel paid R5000 to get the R10000 salt water pearl necklace back.  Sizwe was angry that the pastor lied to them.  But Zukiswa wasn’t upset at all, she found it admirable that Pastor Gabriel would make such a great sacrifice for them.

Sizwe then called a church council meeting with the elders to discuss whether the pastor should be fired for his lies. 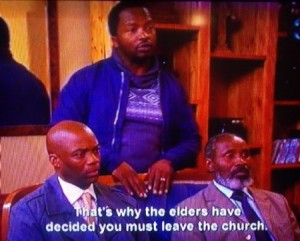 They decided that he should be fired, but after a passionate plea from Pastor Gabriel  and after some deliberation, they decided to give him one more chance.

Zukiswa was given a job to lead a women’s group – supervising the soup kitchen or something – which made her very happy.  My favourite scene of the entire week was when Zukiswa and Katlego were discussing the new pastor. 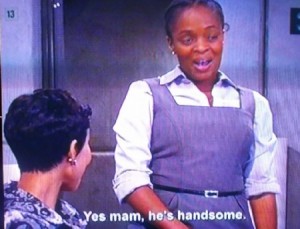 Can you even imagine the sparks that will fly between Pastor Gabriel and Katlego Sibeko when they eventually meet??? Sjoe! Just the thought.

However, Zukiswa’s admiration for pastor Gabriel was slightly tarnished when she walked into the pastor’s office and caught him with Nina in his office! 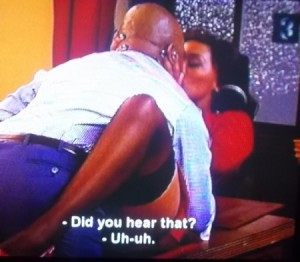 Pastor Gabriel saw no other option, but to break things off with Mme Zamdela. With immediate effect.  The lady wasn’t happy at all.

As for the rest…

Sechaba and Skhu entertained some I think tv commentators for two episodes talking about the weekends Soweto derby.

Bradley and Barker and the hotel staff were doing there thing – mostly ignored by me.