Last week on 7de laan, Bernard and Nandi shared a kiss.  Realising that she only had friendly feelings towards Sifiso, Nandi broke up with him. 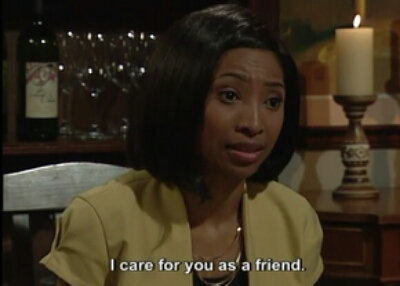 Sifiso did not take it well at all!  He nagged and acted a like a 6 year old brat when he couldn’t get his way.

Firstly, it’s not as if he and Nandi were married.  They dated for all of 1 week! The point of dating is to anyway see if two people are suited to a relationship.  No one owes anyone anything, until they are in a committed relationship.

Sifiso’s ego was probably just bruised.  And when he accidentally found out that Bernard was the new guy in Nandi’s life, he got angry and punched Bernard and insulted Nandi. 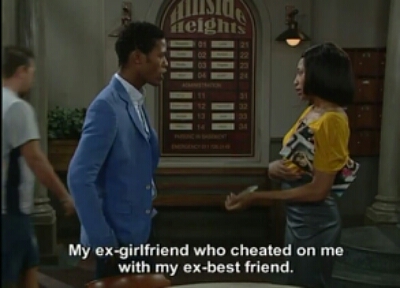 Even after the punch, the fool still carried on as if a great injustice was perpetrated against him.

Bernard and Nandi agreed that they wanted to be together, although Nandi’s doubts stems from them being from different races and cultures.  Felicity related her experience of dating and marrying someone from a difference race.  Although Herman and Felicity were from different races they were not from different cultures. Many, many other South Africans have already crossed that Rubicon though. Isidingo did it more than 10 years ago!

I love Bernard and Nandi – without even the racial drama surrounding them.  They just look good together and there is some good chemistry too.

While Matrone and Douglas also have good chemistry, that old man is driving Matrone crazy! 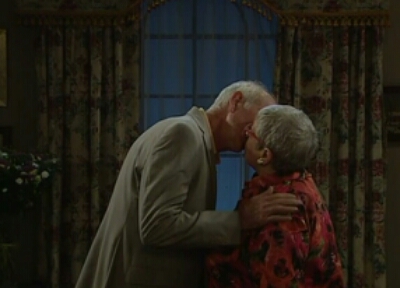 As someone who has lived alone and now sharing accommodation (in a foreign country in my case!), I can relate to Matrone’s annoyance.  Douglas is more than a bit overwhelming.

He won’t leave poor Matrone alone!  Everywhere she turns…there he is! Moving things around, offering help, telling Matrone when to eat and when to take a break. 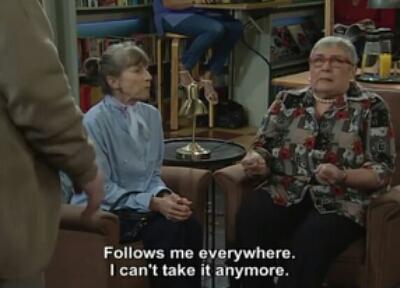 Oubaas offered some Douglas some advice on giving Matrone space, but that just caused the old man to up the ante.

I hope he tones it down soon, because he is a nice looking, friendly old gentleman.  If he continues as before, he surely will be shown the door – permanently!

Xander was released from prison.  But we viewers were not relieved of Xander’s mood swings. 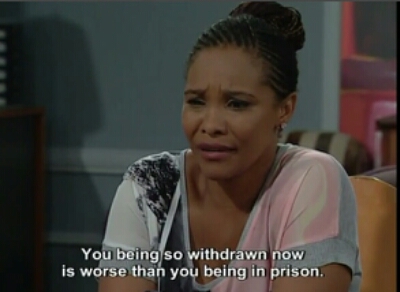 No sooner was he home when he started on Vanessa because she believed Natalie, rather than him. I’m the last person who would defend Vanessa – one of my least favourite 7de laan characters – but she wasn’t wrong in at least wondering if her husband has done what Natalie claimed.

No one other than us viewers knew she had an agenda. The women who believe their husbands 100% are the ones who are usually get a bad surprise when the truth comes out.

Xander meanwhile hasn’t mentioned that he spent all the family savings on prison bribes, even when the opportunity arose.

Gita came up with the idea to frame Felicity for Herman and Louis’ murders.  To put the plan into action, they needed to get into the Croukamp mansion. Ty agreed to get in by asking Willem to go drinking and picking up girls. 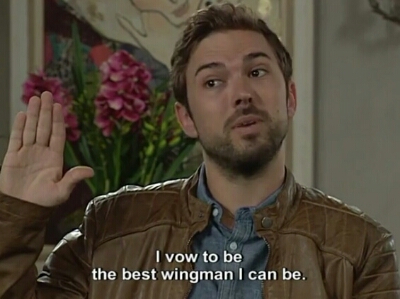 Once Gita got into the mansion, she found pictures of Mr Masangu – the man who wanted to buy The Heights to turn into a luxury hotel and spa.  In a compromising position.

Willem caught Gita roaming around The Heights in disguise.  He dragged her up onto the building’s roof and wanting her to throw her off to avenge his father and brother’s deaths. 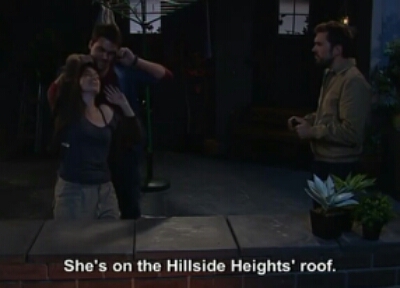 Ty got there just in time and started filming Willem with his cellphone camera and threatened to give it to the police.  Willem instead called the police.

Gita was arrested and given R20 000 bail, which she of course doesn’t have.  Ty said he would give it to her if she tells him who his father is. 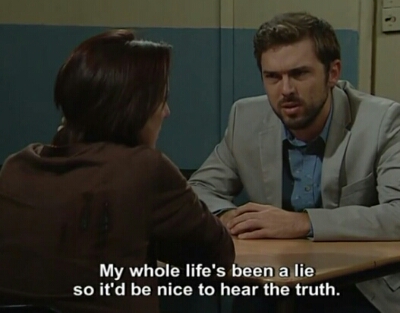 Gita refuses. Even though Ty said he needed to know, regardless of how bad his biological father was.  Up to now she still refuses to say.  Which makes me wonder if her father or an uncle who close friend perhaps sexually assaulted her.  All she would say was that the man is even worse than her.  So he has to be pretty bad.

By the way, I absolutely adore Ty! I can’t imagine 7de laan without him!